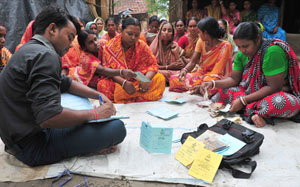 Bandhan (meaning togetherness) was born in 2001 under the leadership of Mr. Chandra Shekhar Ghosh, a Senior Ashoka Fellow. The main thrust of Bandhan is to work with women who are socially disadvantaged and economically exploited. Bandhan works for their social upliftment and economic emancipation. To achieve the above objective, Bandhan is basically engaged in the delivery of microfinance services to the poor women.

Bandhan has been engaged in the delivery of microfinance service for the last 13 years. The model followed is individual lending through group formation. All microfinance activities are carried under Bandhan Financial Services Limited (BFSL), incorporated under the Companies Act, 1956 and also registered as a Non Banking Financial Company (NBFC) with the Reserve Bank of India (RBI).

The microfinance operations started from Bagnan, a small village which is 60 kms away from the city of Kolkata. In 13 years, Bandhan has travelled a wide geography of 22 States and Union Territories with special focus on eastern and underdeveloped states of North East.

Bandhan’s commitment towards triple bottom-line values is strongly asserted by its intervention in development activities. It believes that Microfinance is not the last word for development of the poor. Aspiring to holistic development of the poor, Bandhan offers development activities in crucial fields of education, health, unemployment, livelihood and the like through its not-for profit entity. Besides, Bandhan also has a program exclusively for the hard core poor (generally believed to be bypassed by microfinance).

Over a short span of 13 years of operation, Bandhan has received various accolades for the efforts it is taking towards women empowerment and poverty alleviation. These awards are not just mere awards but more of a motivation for the entire team to march ahead towards achieving its mission and vision. Bandhan takes this opportunity to thank all those who have been associated with Bandhan and have supported our endeavors in whatever way possible.